Despite the hotel’s firealarm, which forced us all to leave the room, out to the “pleasant” New Orleans’ weather, when I was on slide 12, I eventually finished the presentation of this paper in the 2011 Congress on Evolutionary Computation: 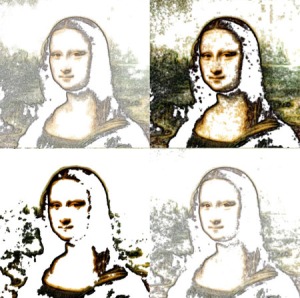 Abstract—Ant algorithms are known to return effective results in those problems that may be reduced to finding paths through a graph. However, this class of bio-inspired heuristics have raised the interest of the artistic community as well, namely of the artists that work on the blurred border between art and science. This paper describes an extension of an ant algorithm that, although has been designed as an edge detection tool and a model for collective perception, has also been used for creating artworks that were exhibited to a heterogeneous audience. The algorithm is a self-organized and stigmergic social insects’ model that is able to evolve lines along the contours of an image, in a decentralized and local manner. The result is the emergence of global patterns called pheromone maps. These maps – which were later named with the term pherographia – are grayscale sketches of the original black-and-white image on top of which the model evolves. This work goes beyond grayscale images and addresses colored pherographia, by proposing several image transformation and border selection methods based on behavioral variations of the basic algorithm.